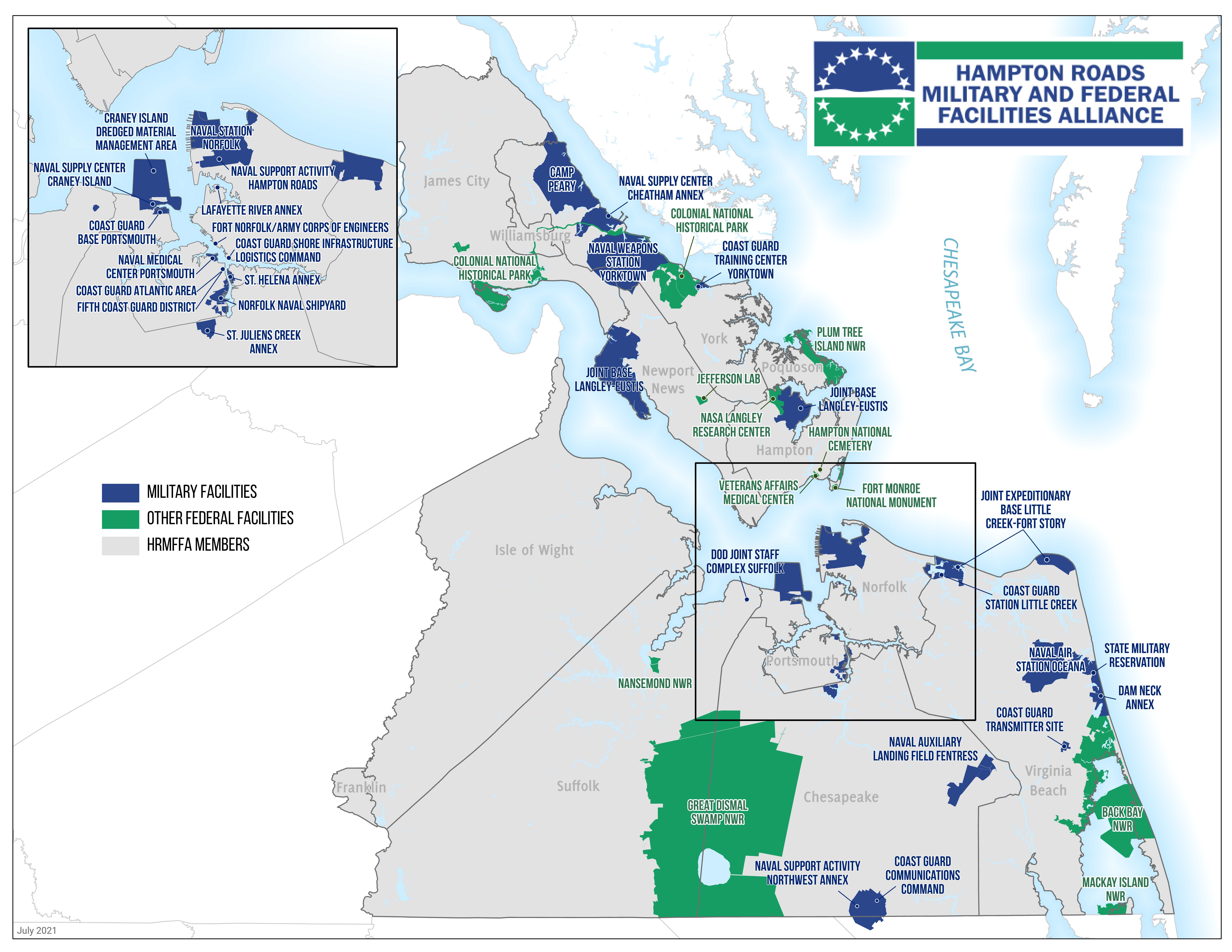 DEPUTY EXECUTIVE DIRECTOR AND BOARD SECRETARY

Federal capabilities in the HRMFFA region are spread throughout eleven of the thirteen localities comprising the Alliance with impact in all communities.

The following Federal departments, administrations, and agencies are represented in the Hampton Roads region:

The Alliance coordinates with locally elected officials; senior federal government leaders for all area facilities, commands, and organizations; the Virginia Congressional delegation; the General Assembly; the Commonwealth of Virginia; and industry to insure awareness of anticipated Federal actions with near, mid and long-term impact on the Hampton Roads region.

The communities that make up the Hampton Roads region collectively support 18 military installations (including two joint bases), five of the six branches of the military services, approximately 140,000 active duty, reserve and civilian personnel, over 135,000 military dependents, and over 230,000 veterans. It is the only place in the country that hosts four different 4-star commands including the Air Force’s Air Combat Command, Army’s Training and Doctrine Command, Navy’s Fleet Forces Command and NATO’s Allied Command Transformation, which is also the only NATO headquarters located on U.S. soil. Norfolk Naval Station is the largest navy base in the world, and Langley Air Force base is the longest continuously active air force base in the world. There are also more Coast Guard personnel stationed in the region than any other place in the country, including Washington, DC. The military presence is an integral part of the Hampton Roads economy, accounting for approximately 42% of the gross regional product of $100B. This includes approximately $24.8B in direct DoD spending in 2021. Military personnel, DoD civilians and contractors account for approximately 20% of all employment in the region with another 15% indirectly attributed to the military’s presence. In addition to the economic impact, the military members and veterans bring to their local communities a diverse, well-educated and service-oriented population that is a tremendous benefit to our local schools, houses of worship and community organizations.

Outside of DoD, the NASA Langley Research Center has the next largest federal financial impact on the area and has approximately 3,400 civilians and contractors working there. It was the first civilian aeronautical laboratory in the United States and celebrated its 100th anniversary in 2017. Its activities generate approximately $1B of economic impact in Hampton Roads, along with 6,500 high-tech jobs. They conduct research in all of NASA’s areas of expertise, including exploration and science, but about half of their work is in aeronautics. Much of their research centers around advanced composites for future aircraft and spacecraft applications, but they have potential applications in other industries such as automobile manufacturing. NASA Langley is also doing a lot of research work on unmanned aerial systems (UAS) and the deconfliction and integration of UASs into the national airspace. Additionally, NASA opened a new $95M, 175,000SF Measurement Systems Lab in April 2022.  This follows the construction of a new 40,000SF computational research facility that opened in 2017.

Another gem of the region is the Department of Energy’s Thomas Jefferson National Accelerator Facility in Newport News, a hub of world-class nuclear physics research. Over one-third of the PhDs in nuclear physics awarded in the U.S. are based on Jefferson Lab research. Its primary mission is to study the atomic nucleus using its Continuous Electron Beam Accelerator Facility (CEBAF), but it also carries out applied research with industry and university partners using a Low Energy Recirculatory Facility that was developed by the lab based on its superconducting technology. The lab employs over 700 people and has an annual budget of approximately $150M. They recently completed a $338M upgrade to double the energy of its CEBAF beam from 6 billion electron volts (GeV) to 12 GeV.